Despite trailing Donald Trump’s campaign website in Google search visibility for many months, in recent weeks Biden’s site joebiden.com has improved its organic search performance while donaldjtrump.com has nosedived according to new research.

This is partly down to the popularity of an interactive tool on the Biden site which lets voters compare the tax they paid with Donald Trump’s tax payments.

One of the reasons behind the Biden website’s improved performance is his team’s introduction of the Trump “tax calculator”, an interactive online tool in which voters enter the amount of tax they paid in 2017 and compare it with how much the US President paid in that year. 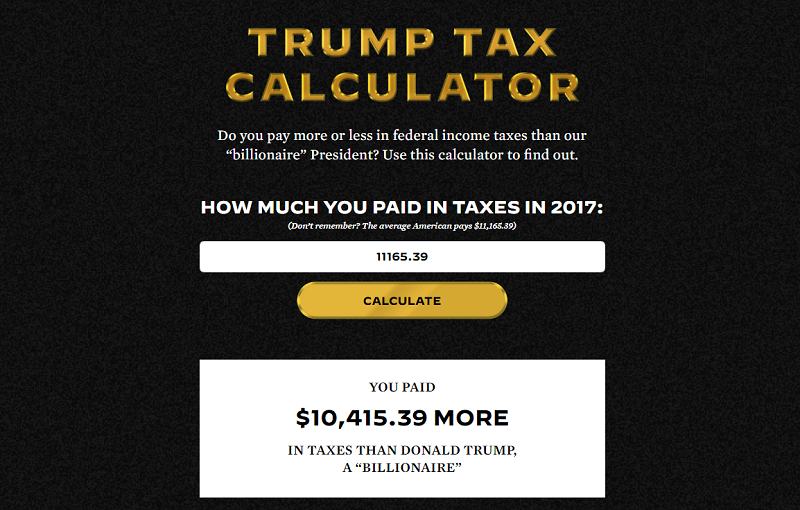 With this tactic, the Biden campaign site was able to get very high Google rankings for a large number of search queries about Trump‘s taxes which were triggered by news stories about this topic at the time. The calculator attracted media attention and earned the Biden website backlinks from many publisher sites which helped to drive the improvement in search performance. Other keywords which pushed the Biden website up the rankings substantially were “obama care” and “gun control”, i.e. typical Democratic topics.

At the same time, Trump’s campaign website slipped down the rankings on Google.com for a number of topics in late September.

In fact, on September 27th, 2020, the Trump site lost roughly 45 percent of its Google visibility for keywords like “vax”, “coalition” and “Washington Post” according to the research. In many cases this drop in rankings was for blog posts directed against Democratic presidential candidates Biden and Harris or in response to statements made against Trump. 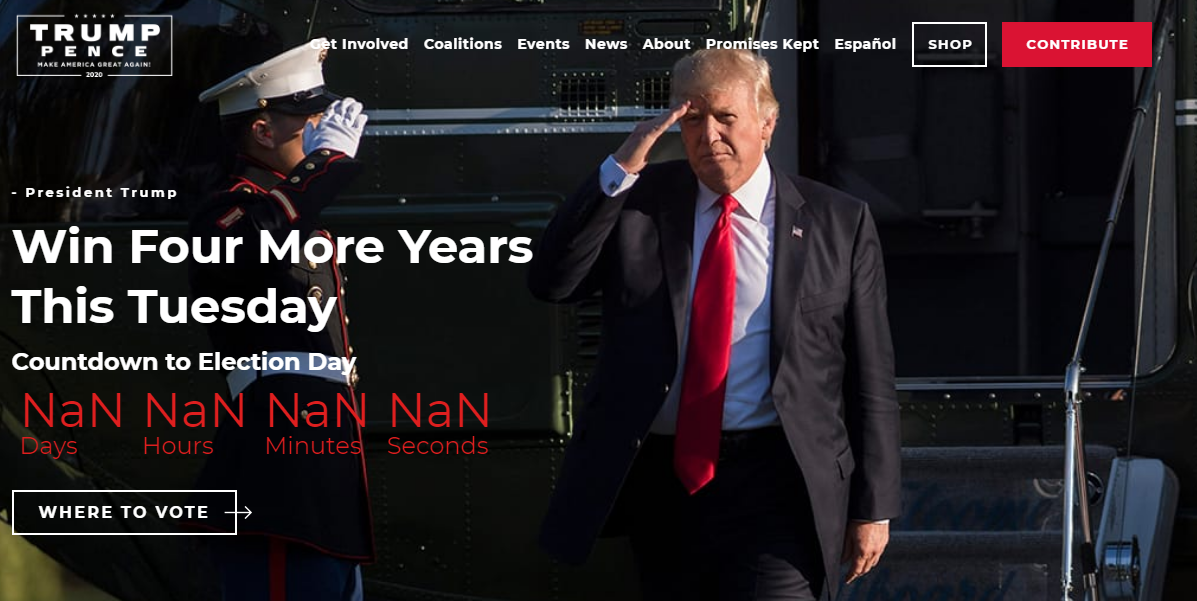 Many of these blogposts are very short according to Searchmetrics’s analysis. It may be that Google first ranked them high because they came from an official, somehow trusted website, the Trump campaign website. However, after some days or weeks, these posts got reconsidered by Google and possibly lost rankings due to their thin content. 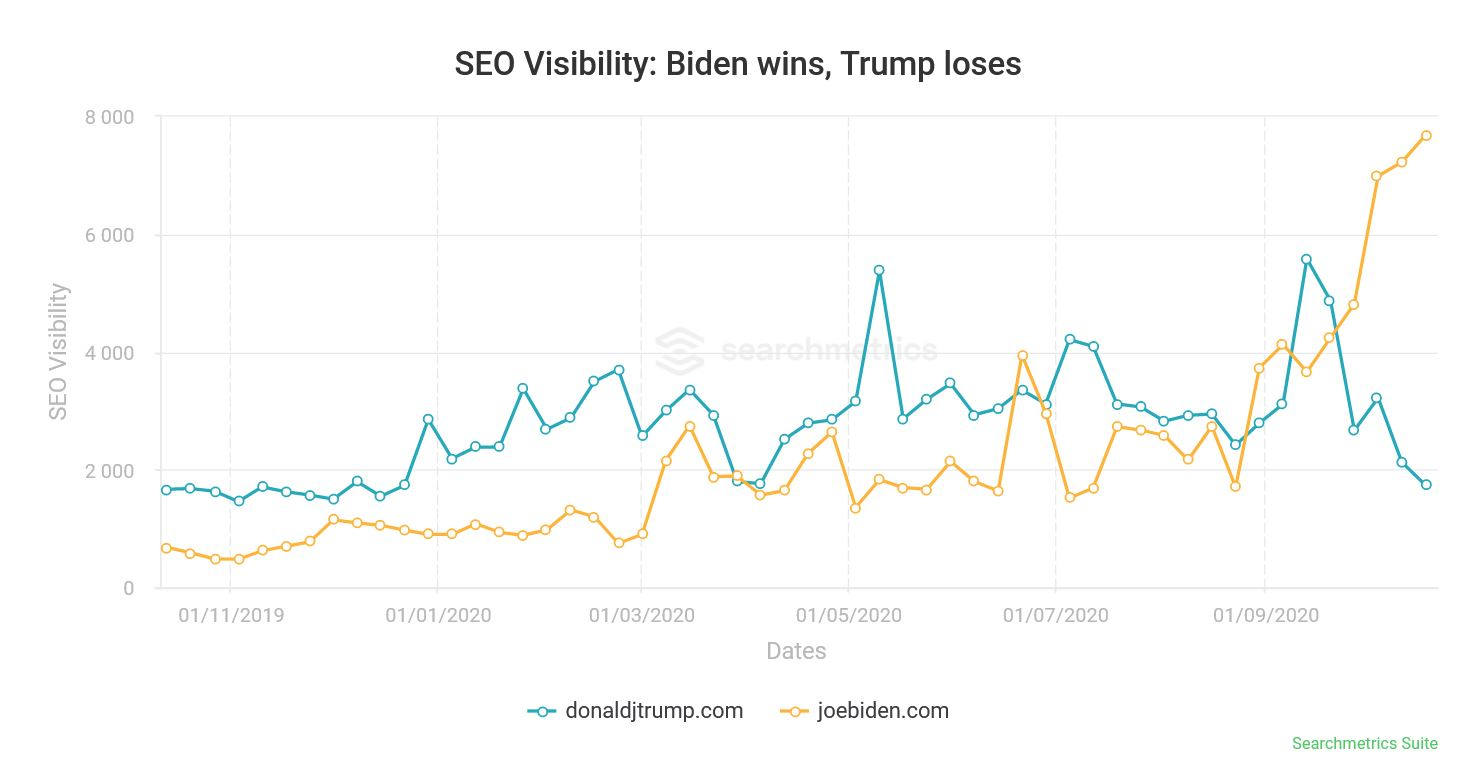 Polarized US election campaign: little overlap between the Trump and Biden websites

Interestingly, the study shows that between them the Trump and Biden rank on Google for a total of roughly 10,000 keywords. But only two percent of these keywords are ranked for both the Democratic and the Republican presidential websites. This suggests that the election campaign websites from Trump and Biden are optimized for very different topics.

The analysis of Google rankings of both campaign websites reflects the strong polarization found in the US election campaign in 2020, with surveys showing significantly fewer undecided voters – one of the reasons why both candidates are trying to mobilize as many of their own supporters as possible by focusing on issues that matter to them.

Biden’s website is neatly structured by political topic; the topics that are most relevant for top Google rankings are immigration, gun law, healthcare and women’s rights. However, some areas of the Trump website often contain no political content. Instead, the site advertises campaign appearances and its merchandise store; the main political content comes in the form of a handful of short blog posts.

At the same time, Searchmetrics notes that both websites are mainly about donations, merchandising, and mobilizing support: Anyone who visits the homepages of either candidate will not be inundated with political content.

How the two websites use paid search ads

One thing both websites are clearly looking to achieve is revenue from Google Ads from links to their respective stores, where their supporters can stock up on countless merchandising products. The range of merchandise offered includes clothing, stickers and even dog leashes. The Trump store has Trump coloring books, wooden trains, protective clothing and whiskey glasses, while the Biden store offers a range of face masks and Biden/Harris add-ons for the Nintendo Switch game Animal Crossing.

The Searchmetrics study analyzed the search performance on Google.com of the two US presidential election candidates’ campaign websites donaldjtrump.com and joebiden.com throughout 2020.